An in-depth explanation of the substances to avoid and the foods to eat,
lists of risks and benefits, links to helpful websites, and answers to the most common questions about the Word of Wisdom. 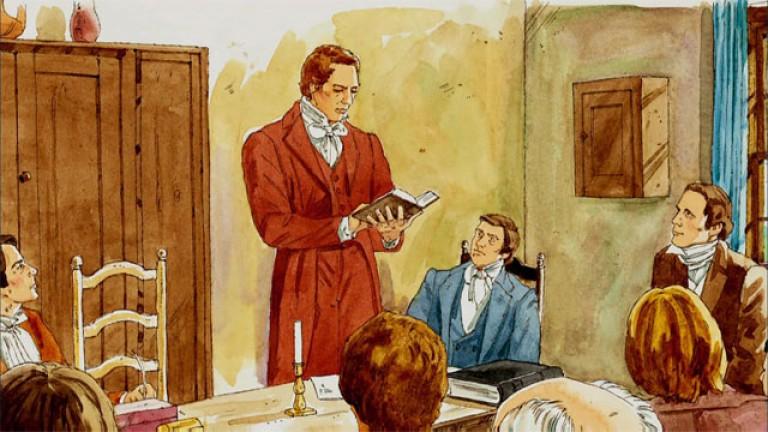 What is the "Word of Wisdom"

The “Word of Wisdom” is a law of health revealed by the Lord for our physical and spiritual benefit. In short terms, it is a health code for the members of The Church of Jesus Christ of Latter-day Saints which we must abide by in order to go to the sacred temple and to have a healthy living. On February 27, 1833, the Lord revealed which foods should we eat and which substances must be avoided. He also promised the gift of health, protection, knowledge, and wisdom to His children that obeyed the Word of Wisdom.

The Word of Wisdom prevents the members of The Church of Jesus Christ of Latter-day Saints from consuming alcohol, tobacco, tea and coffee, illegal drugs, and harmful substances. It also teaches us to eat healthy foods such as fruits, vegetables, grains, and to eat meat sparingly.

In the Doctrine and Covenants section 89, the Lord revealed that the following substances are harmful and shouldn’t be consumed:

And if we intentionally take anything harmful into our bodies, we are not living in harmony with the Word of Wisdom. Illegal drugs and abuse of prescription drugs can destroy us — physically and mentally.

In the Word of Wisdom, the Lord also declared that the foods that are good for us are:

Okay, now that we already have the complete list above, I think it’s better if we discuss them one by one to make them clearer. Let’s start with the harmful substances that we shouldn’t consume or use: Alcoholic Drinks, Tobacco, Tea and Coffee, and other drugs. And after the Dos and Don’ts, we will proceed with the blessings of the Word of Wisdom.

If you are raised by a family that obeys the Word of Wisdom, ignoring alcoholic drinks throughout your life is a habit and lifestyle. But if you are still new in the Latter-day Saints faith and have been a moderate to heavy drinker, avoiding alcohol is a real nightmare.

But if you think of it thoroughly, you know it for yourself that alcohol intake is never a good idea right from the start — right from the moment you first tried alcohol. Let’s face the truth that we are in the midst of an alcohol epidemic. Since the early 1990s, social drinking has increased dramatically together with a similar increase in alcohol use disorders and drinking problems. If we look at the numbers, the alcohol-related death rate increased by 85% from 2007 to 2017. Don’t you think this is disturbing?

The effects of drinking alcohol will begin immediately once you take your first sip. Although one glass a day may not cause you dreadful effects, overcoming addiction will be your main concern. Once you find yourself having a hard time stopping after one glass, or if the habit grows, the cumulative effects can add up.

If you still have the thirst and I haven’t successfully pointed out the bad effects of alcohol, let me enumerate all the risks you will possibly face:

For a detailed explanation of each of the above, check out healthline.com’s “The Effects of Alcohol on Your Body”. And since we’re talking about numbers, alcohol kills about 3 million people every year — which is about 5.3% of the total number of human deaths. But if people around the world have been living the Word of Wisdom, there would be no alcohol-related deaths.

You know that everyone is aware of the side-effects — no, the bad-effects — of tobacco. You have been taught not to try smoking since you were a kid, right? I won’t ask the “Why?” question because you certainly know that the use of tobacco has never been good.

In the Word of Wisdom, we are taught that we must not let tobacco enter our bodies. The reason is pretty simple — tobacco contains a highly addictive chemical compound called “nicotine” which makes people who smoke to continue to smoke. Nicotine is the culprit why smokers have a hard time to quit smoking.

But nicotine isn’t the only villain in smoking. Cigarettes, cigars, e-cigarettes, vape, hookah, pipe, or any other similar products are made with other harmful chemical substances. These substances, together with nicotine, damage the human body. If we’ll go with numbers, tobacco kills more than 8 million people each year — more than  7 million smokers and about 1.2 million secondhand smokers.

“Wait, what? Secondhand?” Yes, you saw it right. Secondhand smoke is the smoke coming from the burning end of any tobacco product, or the smoke exhaled by the person who is smoking. So if you’re a smoker and you cannot stop smoking, think about the people around you.

The Word of Wisdom taught us not to use tobacco in order to prevent diseases such as:

For more details, you can check out Medical News Today’s “How does smoking affect the body?” and Center for Disease and Control Prevention’s “Health Effects of Cigarette Smoking”.

We will start with the drug they contain. Both tea and coffee have  “caffeine” which is the world’s most widely consumed psychoactive drug — a chemical substance that changes the brain function resulting in alterations in mood, behavior, perception, consciousness, or cognition. Once consumed, caffeine’s effects will immediately start over.

In the medical field, there are findings that caffeine is used to reduce the risk of heart disease and type 2 diabetes, but still depends on the person taking it. People have been drinking tea or coffee alongside with pain relievers to treat migraine headaches, tension headaches, and even minor headaches.

However, this doesn’t mean that caffeine is good for our bodies. There are risks when you drink tea and coffee. First and foremost, you know that caffeine is addictive — after you drink a cup, you will crave for another cup, then another, until you find yourself having a hard time to quit. Believe me, people are having a hard time quitting tea and coffee, just like alcohol and tobacco.

For the record, 80% of the world’s population and 90% of Americans consume caffeine in every way. But even if it’s the most popular drug, it doesn’t mean that we also need to take it. Remember what President Russell M. Nelson said?

“Even if everyone is doing it, wrong is never right.”

Aside from addiction, there are other unpleasant side effects of caffeine which are very bad for our health:

For more information, check out caffeineinformer.com’s “20+ Harmful Effects of Caffeine”.

Another significant thing why we should avoid tea and coffee is because the Word of Wisdom teaches us to treat the human body as a temple. Every human body has its own capacity to do things. So if you are tired, that means your body needs some time to rest.

However, people drink tea and coffee to push their bodies to do more things which their bodies cannot handle. For example, a worker who has an 8-hour shift drank coffee to work for another 4 hours, a student drank tea to study overnight in preparation for the next-day exams, and you who are actually sleepy but need to stay awake for internet browsing. All of these examples are against the Word of Wisdom. Please respect the capacity of your body to do the work.

And now that we’re done with the harmful substances to avoid, we will now talk about the foods that are good for our health. Remember, following the Word of Wisdom means following “ALL” of them. Eating the YES foods is as important as avoiding the NO substances.

The flesh “of beasts and of the fowls of the air”

…which is “to be used sparingly”. We’re talking about meat, obviously. But we should eat just enough meat, not too much. We just need to complete our required daily amount of protein, vitamins, and minerals. Some of the bad effects of too much meat are dehydration, muscle cramps, body odor, constipation, headache, increased risk of vision loss, weaker bones, and fatigue. You can read the full details on bustle.com’s “9 Surprising Possible Effects Of Eating Too Much Meat”.

…such as wheat, rice, and oats, which are “the staff of life”. We need fiber in order to maintain a healthy weight, prevent constipation, lower the risk of diabetes, heart disease, and some types of cancer. It also lowers the cholesterol level, normalizes bowel movements and helps maintain bowel health, helps control blood sugar levels, and helps you live longer. And grains, such as wheat, rice, and oats, are high in fiber. For more details, read healthline.com’s “Why Is Fiber Good for You? The Crunchy Truth”.

What Does God Offer to Those Who Keep the Word of Wisdom?

If we obey the Word of Wisdom, the Lord promised that:

1. What tea is against the Word of Wisdom?

All kinds of tea. Whether it’s green tea, white tea, black tea, herbal tea, or the all-around iced tea, all of them are made with tea leaves. So it is highly advisable to always check the ingredients of the drink before drinking them.

2. What coffee is against the Word of Wisdom?

The church clarifies that drinks with names that have ‘cafe’ or ‘caffe,’ ‘mocha,’ ‘latte,’ ‘espresso’ or end with ‘-ccino’ typically contain coffee and are in violation of the Word of Wisdom.

For more information, you can check out the Word of Wisdom clarification (2019) given by the Church Leaders: Vaping, Coffee, Tea, and Marijuana.

Self-discipline, together with the strength from the Lord, help from family members and friends, and guidance from the church leaders, living the Word of Wisdom is as easy as ABC.